-Severe haze hovered over large areas of China in January 2013 right after the public release of PM2.5 data of major cities in China at the very first time. Residents of Beijing and many other cities in China were warned to stay inside in mid-January 2013 as the nation faced one of the worst periods of air quality in recent history. The Chinese government ordered factories to scale back emissions, while hospitals saw spikes of more than 20 to 30 percent in patients complaining of respiratory issues, according to news reports. [2]

A View of the Situation:

The above natural-color images of northeastern China were taken by NASA's Terra satellite using The Moderate Resolution Imaging Spectroradiometer (MODIS) on on January 14 (left) and January 3(right), 2013. "The left image shows extensive haze, low clouds, and fog over the region. The brightest areas tend to be clouds or fog, which have a tinge of gray or yellow from the air pollution. Other cloud-free areas have a pall of gray and brown smog that mostly blots out the cities below. In areas where the ground is visible, some of the landscape is covered with lingering snow from storms in recent weeks. (Snow is more prominent in the January 3 image.)" [2]
By comparing the two images, there is a distinct different between the visibility of geographical features caused by the massive haze lingering over China. The image on the left is much more blurred than the image taken earlier on the right. This decrease in visibility has prompted hundreds of flight cancellations around the country. The aviation regulator instituted new rules requiring senior pilots on flights into and out of Beijing to be able to land in low visibility. According to officla Xinhua news agency, the visibility was less than 100 metres (109 yards) in some areas of eastern China. If you picture yourself doing a 100m race, the visibility range would render you unable to see the finish line. Air China cancelled 14 domestic flights in or out of the Beijing airport, and an airport in the eastern city of Qingdao was closed, cancelling 20 flights.
The disruptions came in the first week of the country's peak, six-week period for travel, linked to the 10 February lunar new year. Every year, China's transport system bursts at the seams as tens of millions of people travel for the holiday, in the world's largest seasonal migration of people.
When the image on the left was taken, PM measuring tools at the US Embassy in Beijing recorded PM 2.5 measurements of 291 micrograms per cubic meter of air. Also at the time of the image, the air quality index (AQI) in Beijing was 341. An AQI above 300 is considered hazardous to all humans, not just those with heart or lung ailments. AQI below 50 is considered good. On January 12, the peak of the air crisis, AQI was 775 the U.S Embassy Beijing Air Quality Monitor—off the U.S. Environmental Protection Agency scale—and PM2.5 was 886 micrograms per cubic meter. [2]

Find out more about PM: (/particulate-matter.html) 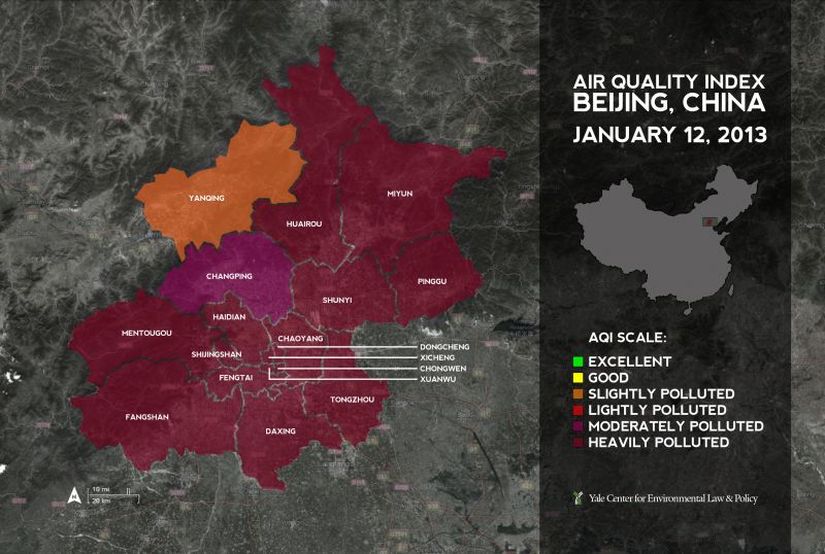 Figure 1.3 here is a more detailed coverage of the two satellite images discussed earlier. All these districts are districts of Beijing and from what we can see. Beijing is heavily polluted with the exemption of Yanqing. [3]

Where did this air pollution come from in Beijing?

During Chinese New Years, Beijing encouraged residents to lay off the holiday tradition of launching fireworks, causing a 37% drop in fireworks sales from the previous year. The government also made the questionable move of cracking down on Beijing’s outdoor barbecues.
But the government finally made a move to address the real culprit. The government announced in September a 1.7 trillion yuan ($277 billion) plan to reduce the smog by cutting the use of coal and decreasing emissions from cars, with Beijing aiming to lower PM2.5 levels by 25% by 2017. [5]

Improving communication of air quality to public:
"Beijing has now included timely reporting of air quality data, through various avenues. The air quality data reported to the public is already consistent with the revised air quality standards (GB 3095-2012), even though national implementation is still in 2016. The Air Quality Index (AQI) provided by Beijing Environmental Monitoring Center (BJEMC) already includes PM2.5 (equivalent to (WHO) Interim Target 1 (IT-1) (70 µg/m3). This shows that Beijing is releasing data linked with health implications to public."[7]

The BJEMC website (http://zx.bjmemc.com.cn/) provides detailed information on air quality levels per station and per pollutant in the city including PM2.5 - (fine particles).

Note here that there will only be evaluation on the effectiveness of the emergency response plan, not the overall issue of air quality

The reduction of launching firework through encouraging is certainly a fair method of responding to the immediate situation as seen through the 37% drop in firework sales. Fireworks and crackers generate a variety of contaminants, including gases such as carbon monoxide, sulfur dioxide and nitrogen oxide, in addition to aerosols of micro particles known as particulate matter. The difference between fireworks and other pollutants is that fireworks have a wide coverage of area after launching, meaning that the pollutants are spread faster. However, a better way would be to prohibit the launching of fireworks during Chinese New Years. This may negatively affect some business, but this approach is needed for a effective response.
The Emergency response plan implemented by Beijing seems to be fairly effective overall. Sending fourteen inspection teams to 14 districts to oversee pollution measures is an effective way of ensuring the measures are carried out properly. Moreover, halting spot to Tuesday was a very obvious approach to take, but simply halting it to Tuesday in "extreme pollution areas" is a horrible choice as they should take into account the scenario that the crisis does not calm down within two days. A more reasonable halt would be halting sport for primary and middle schools for at least a week then making further readjustments if necessary. Suggestions provided to the public regarding health should be provided at all times but not part of the emergency response plan, a more effective measure would be to "strongly reinforce pollution-health related communication and information to public" Additionally, by targeting heavily polluting enterprises to reduce emissions and constructions, this acts as a  very direct method of reducing pollutants. The direct effectiveness of this plan can be seen in figure 1.6 below where we can see a drop of hazardous air quality down to within the unhealthy range. Figure 1.6 is a result of the timely reporting act taken by the government, if not for this action, we would be unaware of the air quality. This action improves awareness of the PM level of air quality in China by timely reporting relevant data. The public should now be aware of when to venture out or not. This is no doubt a step towards improving health conditions in China.

Ultimately, the emergency response plan was effective in controlling the January 2013 air pollution crisis but in order to prevent further similar episodes from occurring, long term solutions need to be adopted. 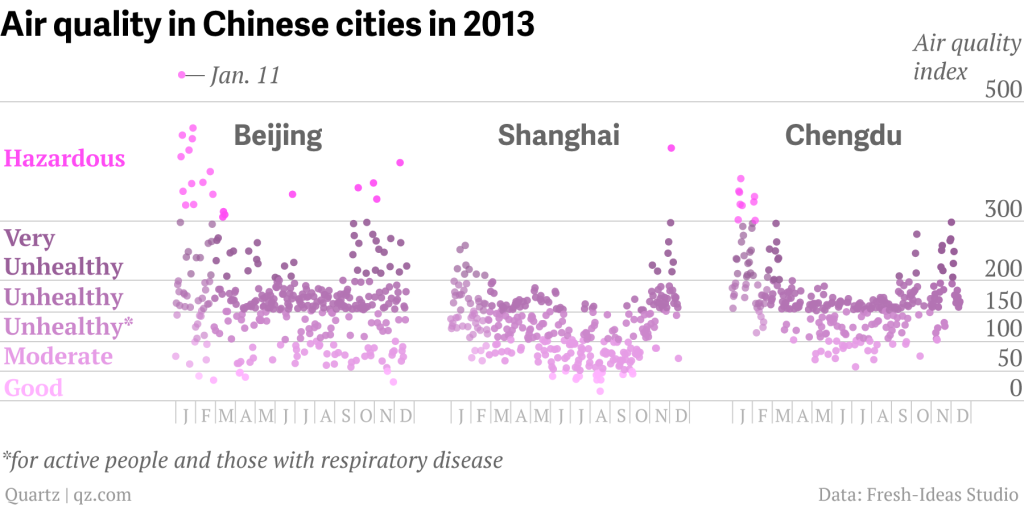